In this match played at the International Cricket Stadium in Dubai, the Bangalore team, captained by Virat Kohli, has almost confirmed its place in the playoffs by winning this match.

In this season, the Bangalore team has won 7 matches in their 11 matches and is in third place in the points table with 14 points. Whereas now the problems of Rajasthan Royals(RR) have increased even more because this is the 7th defeat of the team of Rajasthan Royals.

In such a situation, she has slipped to seventh place in the points table with 8 points after winning 4 matches this season.

Opener Evin Lewis made 58 runs and Yashasvi Jaiswal made a very quick start of 31 runs. Both these players of Rajasthan had added a total of 77 runs in 8.2 overs. But after that, no big partnership was seen for Rajasthan.

5 batsmen of Rajasthan could not even cross the double-figure –

Captain Sanju Samson looked a bit in rhythm for Rajasthan but then he lost his wicket on the score of 19 runs. After Sanju Samson, only Chris Morris crossed the double-figure for Rajasthan and contributed 14 runs. 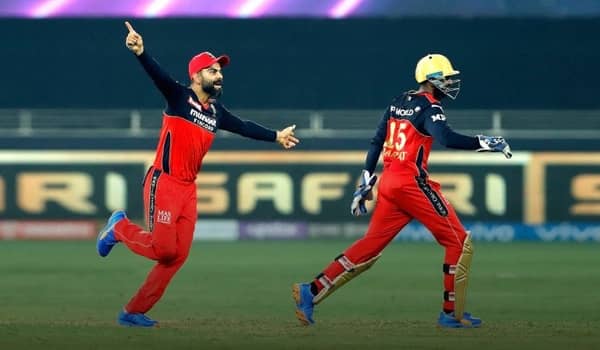 Apart from this, other RCB bowlers UG Chahal and Shahbaz Ahmed took two wickets each, Daniel Christian and George Garten took one wicket each. Due to which the team of Rajasthan Royals came on the back foot and their batsmen lost wickets continuously.

Chasing a respectable score of 150 runs, the Bangalore team got off to a very good start as Devdutt Padikkal and Virat Kohli shared a 48-run partnership for the first wicket. Devdutt Padikkal became the victim of Mustafizur Rahman on the score of 48 runs and after that Virat Kohli on the score of 58 runs was also run out due to a direct throw by Riyan Parag. After the dismissal of these two players, KS Bharat and Glenn Maxwell formed a great partnership and played an important role in taking the RCB team to victory.