Skip to content
According to the news, famous singer Neha Kakkar is in a relationship with Rising Star fame Rohanpreet Singh. He has given the news officially. This news of these two is becoming very fast on social media.
And has been in the news due to the news of her marriage. According to sources, both these singers are going to get married on 23 October in Delhi. Neha Kakkar is going to be married to Rohanpreet. Cards have also been distributed to people for marriage. Neha Kakkar, confirming all this news, has also announced her love relationship with Rohanpreet.

Last Friday, Neha Kakkar shared a beautiful picture of Rohanpreet with her. Sharing it, Singer wrote, ‘You are mine’. Also, Neha has named the pair of herself and Rohan with the #NeruPreet

In a romantic response to this picture on social media shared by Neha, Rohan writes, ‘Babu I Love You So Much, Meri Jaan. Yes, I’m just yours my life’. Commenting, Rohan Preet has also shared the bride’s emoji.

After Neha, Rohanpreet also shared the picture with Neha and told her world. Along with announcing the relationship of both, they are getting congratulations from the fans and friends of the industry.

RELATED  Acharya film Chiranjeevi: Ram Charan and Chiranjeevi will be seen together for the first time

Neha Kakkar recently shared a video on social media from the set of Indian Idol in which she is seen eating cake with Himesh Reshammiya. Neha likes this chocolate cake very much.

He has demanded to eat this chocolate cake of his choice with Rohanpreet. In the story, Neha wrote, ‘I have to eat cake everyday Rohanpreet’. In response to this, Singer wrote, ‘Ya ji, Jo spades meri jaan, meri babu dol, your har spades hai sir aankhon mein’.

RELATED  Sara Ali Khan said we have seen the Coolie No. 1, just twice 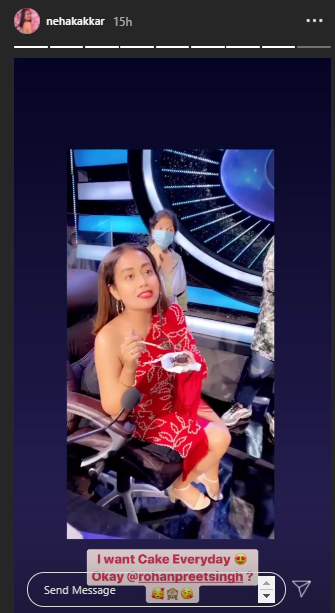 When will Neha get married?

According to sources, the famous singers Neha Kakkar and Rohanpreet are going to get married on October 23. Let all of you know that Neha and Rohanpreet will be married in Delhi. According to the news, both are about to get married in a normal way. Only a few close relatives will attend their wedding. It is being told that Neha has stopped last month, whose pictures have also been revealed. In the picture, Neha is posing with Rohanpreet’s hand holding her parents.