In this Test match, the Indian team may have come on the back foot but India’s fast bowler Mohammed Shami, while bowling brilliantly, managed to take three important wickets on the second day.

With this, Mohammed Shami made a big record in his name. Shami has completed 100 wickets in the army countries. Let us tell you that Shami has become the fifth bowler of India to achieve such a big feat.

RELATED  T20 World Cup, NZ vs PAK 2021: Fans were teasing NZ in the name of 'Security', Babar Azam calmed down

Kapil Dev, Anil Kumble, Zaheer Khan, and Ishant Sharma have done this big feat for the Indian cricket team before Mohammed Shami. With this, Shami is the fourth fast bowler to take 100 wickets in the country.

Let us tell you that for the first time for the Indian cricket team, this feat was done by former India’s legendary captain and all-rounder Kapil Dev.

RELATED  T. Natarajan and Washington Sundar did wonders: this miracle happened once again after 72 years 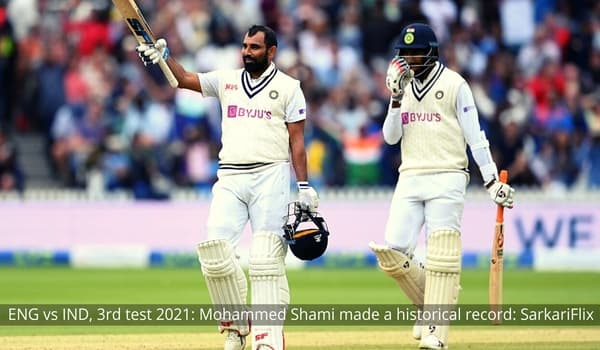 Whereas after that Ishant Sharma has taken 130 wickets in his name in the army countries. After this, the name of former India’s left-arm fast bowler Zaheer Khan comes at number three.

RELATED| IPL 2021: Will Faf du Plessis plays for Chennai Super Kings or not, know what he said

RELATED  World's top-7 most dangerous fielder to be remembered for centuries: three Indians included in this list

After this, Mohammed Shami has now registered his name at number five. With Mohammed Shami’s clean-bowled England opener Rory Burns in the first innings, he became the bowler to take 100 wickets in the country.

The third day of the third test match between India and England is being played today. In which India was all out for just 78 runs in the first innings.